The Leading Partnership Dispute Resolution Service At Your Doorstep

We all know that having two heads is preferable to having one. Starting a company with a partner can be a fantastic way to work. Many businesses, especially professional services firms and startups, use partnerships to collaborate. Conflict will inevitably arise in a business partnership, as it will in any close relationship.

Business disputes can arise within a company, and they can also arise between a company and a supplier, an advertising agency, or even a government agency. There are four different types of business disputes:

Our Expert Know How To Resolve Partnership Disputes

However, a disagreement with your partner does not have to put your business in jeopardy. There are steps you can take to keep disagreements under control, manage them so that each party feels heard, and reach a resolution that keeps your partnership and business safe. 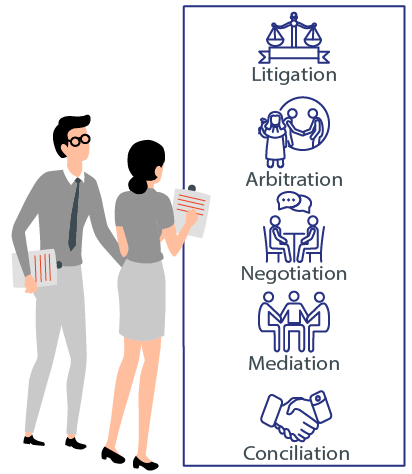 A legal action that must be brought or defended in a court of law can be used to resolve a dispute. A person who has been harmed by a wrongful act can use dispute resolution legal services in Bangladesh to file a lawsuit in Bangladesh’s courts, both civil and criminal, against any other person.

Alternatively, a dispute resolution legal services in Bangladesh can also be resolved through Alternative Dispute Resolution (ADR) rather than going to court. ADR can be used in almost any contentious matter that can be resolved by agreement between the parties under the law. Arbitration, mediation, negotiation, and conciliation are the most common forms of alternative dispute resolution.

Partnerships are not taxed at the entity level in Bangladesh, and profits are treated as part of each partner’s personal income and taxed at personal income tax rates. A partnership firm will need to apply for a separate TIN in its own name. Assume your partnership venture made a profit of BDT 10 lac this year. Up to $250,000 will be exempt from taxation based on the individual tax rate, the rest will be taxed, and the profit earned through the partnership venture will be tax-free for the partners. Unlike shareholders of limited companies in Bangladesh, there is no double taxation for partners.

If you and your partner are on shaky ground, contact us for the highest-quality legal advice at a fixed-fee rate. We have an experienced affiliated lawyer who can assist you in resolving your disputes amicably.

What is the primary process for resolving a dispute?

The first step in the dispute resolution process after a meeting is usually a letter before the claim. It determines your case, what you are looking for and gives your opponent a chance to respond. Subject to the response received, if the dispute is not resolved, it may be that some form of alternative dispute resolution is appropriate. If it is not appropriate or if it fails, the next step will be to issue court proceedings.

How long will it take?

A common dispute can be resolved by agreement between the parties within a few weeks. Depending on the complexity of the case, the lawsuit may take 3 months to 12 months + to complete.

Who will I deal with?

You will be appointed a solicitor in our dispute settlement who will assist you everywhere.

Why do I need a dispute resolution solicitor?

Disputes that may involve court proceedings are complex. A lawyer can help guide you through the process. If you feel the pressure and anxiety of dealing with a dispute, expert advice ca

Get In Touch With Us Now